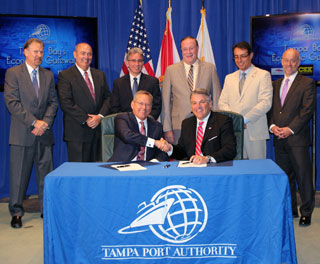 Photos: Rendering of future auto processing facility at the Port of Tampa. Executives from the Tampa Port Authority, AMPORTS and CSX Rail participate in the signing of an agreement with AMPORTS to develop a new terminal for processing autos. Port President and CEO Paul Anderson shakes hands with AMPORTS President and CEO Steven Rand after the signing.

TAMPA, Fla.—The Port of Tampa has a new strategic partner that will provide expertise in processing and handling new automobile shipments, adding diversity to the cargo mix moving through Florida’s largest port. The Tampa Port Authority and AMPORTS signed a letter of intent on Thursday to develop a new terminal dedicated to the import and export of automobiles and rolling stock.

Mexico’s large and growing capacity for automotive production is spurring demand for efficient and low-cost distribution to the U.S. market, where an estimated one in 10 cars sold in the U.S. is made in Mexico. The state of Florida will soon surpass New York as the third most populous state in the U.S., and distributing new cars from the center of the state of Florida provides an optimal supply chain for this growing trade lane.

"AMPORTS is thrilled to be a part of Tampa's automotive growth. We believe that Tampa is right in the sweet spot for short sea shipments out of Mexico. We also believe it will become a gateway port for export finished vehicles,” Steven Rand, AMPORTS president and CEO, said.

“We are very excited about our partnership with AMPORTS, which is a tremendous win for the whole Tampa Bay region. Their confidence in the Tampa Port Authority’s ability to deliver is a validation of our capability and diversification strategy to bring more growth and jobs to the area from multiple lines of business. We are very fortunate to have great partners such as Ports America, CSX Railroad and now AMPORTS,” said Paul Anderson, port authority CEO.

“AMPORTS’ choice of our port highlights our strategic position to provide the automobile industry an efficient short-sea solution to our Florida market and beyond. Because of our central location and access to the I-4 Corridor, we give our customers the best option to reach the entire Florida market”, Raul Alfonso, port authority chief commercial officer, said.

In addition to imports from Mexico, AMPORTS and the Port of Tampa will serve as a gateway for U.S.-produced vehicles aimed toward Latin America and Caribbean destinations.

For more than 50 years, AMPORTS has been a leader in the automotive processing industry. AMPORTS is an International company with operations in the United States and Mexico. With nine locations, AMPORTS is one of the largest auto processors in North America, processing more than one million vehicles annually. All nine full-service AMPORTS facilities are located on terminals with easy access to rail and trucking hubs. AMPORTS Mexico has three operations consisting of two port facilities located in Altamira and Lazaro Cardenas, an inland rail-head facility located in Toluca.

One of the nation’s largest and most cargo-diverse seaports, the Port of Tampa is the largest economic engine in west-central Florida, supporting about 80,000 jobs and generating $15.1 billion in annual economic impact. For more information about the Port of Tampa, visitwww.tampaport.com.